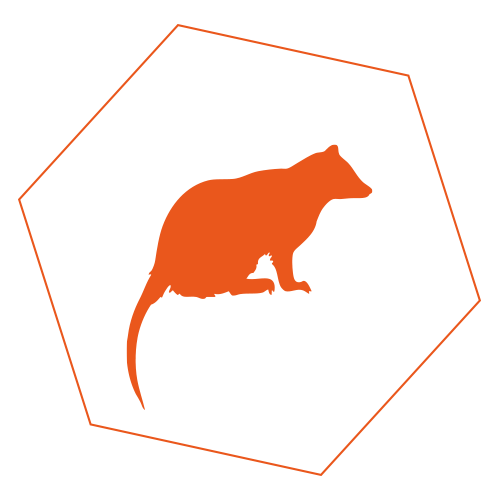 Brushtail and Ringtail possums are native marsupial species that have adapted well to urbanisation and are commonly found dwelling in Australian gardens.

Ringtail possums are a social species that live in nests, called dreys, several metres above the ground. They build them out of bark and leaves and usually dwell in them as a family. Brushtail possums are larger, more territorial possums that usually reside in tree hollows. The trees and gardens around our houses provide a modified woodland environment similar to their natural habitat and both species feed on native plants found in abundance in suburban gardens.

How the work is undertaken: Possums are removed from the premises and their entrance point is blocked off so they cannot re-enter. As a protected species, we can only relocate them to within 100 metres of where they were found.

Many households share their property with one or more possums. Look out for them at dusk moving around your property and along cables in the street. They can become a nuisance if they eat your prized plants or nest in your roof space.

There are many things you can do to make sure you and possums are able to live in harmony with each other.
To stop possums from damaging ornamental plants or fruit in your garden. Build a floppy fence around the garden. Use 80cm wide, heavily galvanised chicken wire. Bury the bottom 20cm and support the remainder on vertical lengths of flexible, high-tensile fencing wire. Bend the wire to curve the upper section outwards.

When the possum attempts to climb the fence it will bend over and then spring back. Use collars to protect fruit trees.

If you have possums residing in your roof call a licenced professional to remove them from the roof and seal the entrance points.