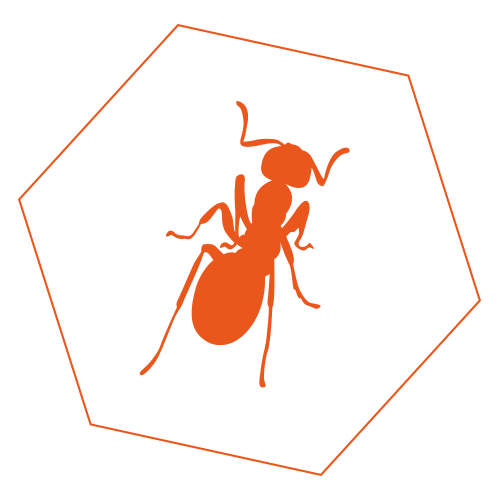 Ants form colonies that range in size from a few dozen predatory individuals living in small natural cavities to highly organised colonies that may occupy large territories and consist of millions of individuals. These larger colonies consist mostly of sterile, wingless females forming castes of “workers”, “soldiers” or other specialised groups.

Nearly all ant colonies also have some fertile males called “drones”, and one or more fertile females called “queens”. The colonies are sometimes described as superorganisms because the ants appear to operate as a unified entity, collectively working together to support the colony.

How the work is undertaken: We use a combination of spraying and baiting externally, internally and also in the roof.

Different species of ants are attracted to different types of food, some of which include sugars, meats, fats, and oils. They also tend to come indoors at times in search of water during dry seasons (September – March).

When desirable items are found, many species will recruit fellow nest-mates to help gather the food and return it to the nest. This can result in large numbers of ants appearing over a short period of time. For expert ant control in Geelong, call Academic Pest Control today.

Why are they considered a pest?
Around the house, you can find ants building nests in walls and foundations, in potted plants (indoors and outdoors), in enclosed areas and even in cavities in toilets and sinks. In almost all cases the nests are built in previously deteriorated areas or in between objects such as rotten wood. They rarely attack solid structures as they tend to take advantage of weakened areas.

Where can they be found in Australia?
Ants can be found across Australia; however, it depends on the species of ant and the habitat which they preside over. For more detailed information on ants and their distribution, check the CSIRO website for accurate scientific information.

Where are they usually found in the home?
This depends on the type of species of ant. They are usually found near a standing water source or in moistened areas. Click on an ant species to see specific habitats around the home.

Typical signs of an infestation

Common types of ants around the home